For those who are not familiar with it, National Novel Writing Month (NaNoWriMo) is an activity where people attempt to write a 50,000 word novel in 30 days. Discover more at www.nanowrimo.org.

That said, I’ve been involved in NaNoWriMo for nearly every year since 2009. I like the sense of sharing an adventure with millions of other people working toward the same goal. And I like the incentive to really focus and concentrate on a writing project.

My first year, I started on November 5 with no idea of the story I wanted to tell. All I had was a setting I liked. It was a crazy scramble every day, writing like a maniac, with no idea where I was going. But you know what? I hit 50K words. And it was FUN. At the end, I had a sweet little story that… well. Okay, it needed some major revision. But it was still a great start.

Each year I try to get better at it. I began to plan ahead (although it might be a stretch to call it plotting). Some years I’ve liked what I produced, and other years my efforts were abandoned. But the important thing was, I learned more about the craft of writing, I made fewer mistakes that I’d need to fix later, and I persevered.

That brings me to this year – I had a story idea all waiting to go. I had plot, a world, and characters. Not, perhaps, as well developed as they should have been; but more than I’d started from any other year. (Actually, I suspect I should have done a LOT MORE world building before attempting a science fiction story. Oh well.) But four days and five thousand words in, it just wasn’t jelling. The energy wasn’t there.

Don’t worry – I didn’t give up. I innovated. Spent the month where I needed the effort — in heavy editing. It’s not my traditional way to spend November, but you know what? Editing comes after writing. It’s progress that matters. 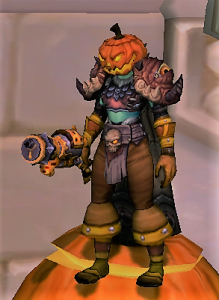 (This is me in Dalaran, posing in my Hallow’s End costume. Scary! Notice the rolling eyeballs in my shoulder armor? Okay, maybe my fashion sense isn’t the best…)

What I meant was, I’m getting ready for NaNoWriMo –figuring out a plot, building a fictional world, auditioning characters, and deciding between first person multiple viewpoint narration, or third. All the little pieces that turn a rough idea into a story.

I’m not really prepared — I haven’t even named half my characters. But then, I rarely am. Only when I spin it out on the page does the story come alive in my mind.

On a good day I’m full of ideas, and the words flow easily. But Nanowrimo isn’t really about that — it’s about writing the words that aren’t easy — writing on the days when you’d rather be doing practically anything else.

And ultimately, that’s what separates a successful writer from the rest of the pack.