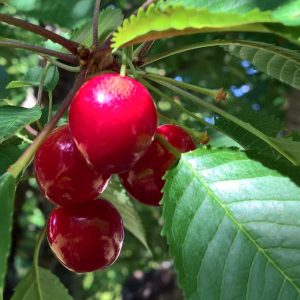 So after a year of looking, we finally found a new house. And this is in the yard. A giant cherry tree full of ripe fruit. And ants — did I mention the ants? They love the cherries even more than we do, and are a bit territorial, you might say. (As I scratch half a dozen bites.)

Cherries for breakfast is totally a thing now. And maybe some for lunch, with cheddar cheese. And then a handful for an afternoon snack… and dessert after dinner… Whenever I run out I go pick some more. What the heck, they won’t last forever; and once they’re gone, that’s it until next year.

I kind of like it that way. Cherries all day every day, just like any good thing, could get old eventually.

It’s been a busy summer for the songbirds in our area, building nests and raising families. A robin has chosen a cleft in the lilac bush outside our kitchen window for her nest, for the second year in a row. I’ve enjoyed watching the activity as sky-blue eggs appeared, and then tiny, cute-ugly dinos hatched out.

But on a steady diet of bugs and fruit, the second week they become floofy and grow weird little pins (the start of feathers) on their wings and backs. By now they’re strong enough to snuggle down quiet in the nest and raise a vigorous clamor when a parent brings them a meal, begging for each morsel.

By the third week they begin to actually resemble birds. The pins grow into feathers and the floof covers them completely. They become louder and more adventurous, practicing for the next stage of their lives — fledging. (See photo of sleepy fledgling on the edge of the nest.)

Today was the day. One was bravely scouting the lilac branches. His sibling looked down and, with the bold optimism of youth, took a leap and left the nest. With parents guarding them and shouting angrily at intruders, they will scamper around on the ground until their feathers finish growing, and then they’ll fly. They’ll follow their parents around for a while, learning how to be birds — how to sing, eat, drink, and recognize danger. In fact, any time you see a bird fluttering its wings at another bird, that is a fledgling begging for food.

And next year, if they learn well, they’ll raise chicks of their own. Maybe in the same lilac bush.

I have 2 stories slated for publication in the upcoming new anthology from WPaD. One of them you can sneak-preview today — in my Flash fiction section — Jim.

The title of the next anthology is… (drum roll)

“Weirder Tales: An Omnibus of Odd Ditties” by Writers, Poets and Deviants

I’ll post a link when it is available for sale.